The start of the next increase to state pension age (SPA) is still nearly five years away, at which point it will be phased up to 67 by April 2028. In the meantime, the Government has confirmed a rise in pension age for private pension provision that was originally suggested in March 2014.

The increase is to be made to the normal minimum pension age (NMPA). This is the earliest age from which non-state pension benefits can be drawn, subject to very limited exceptions. The current NMPA is 55, set in 2010 as 10 years below the then male SPA of 65. The new NMPA from 2028 will be 57, 10 years below what by then will be the SPA for both sexes. 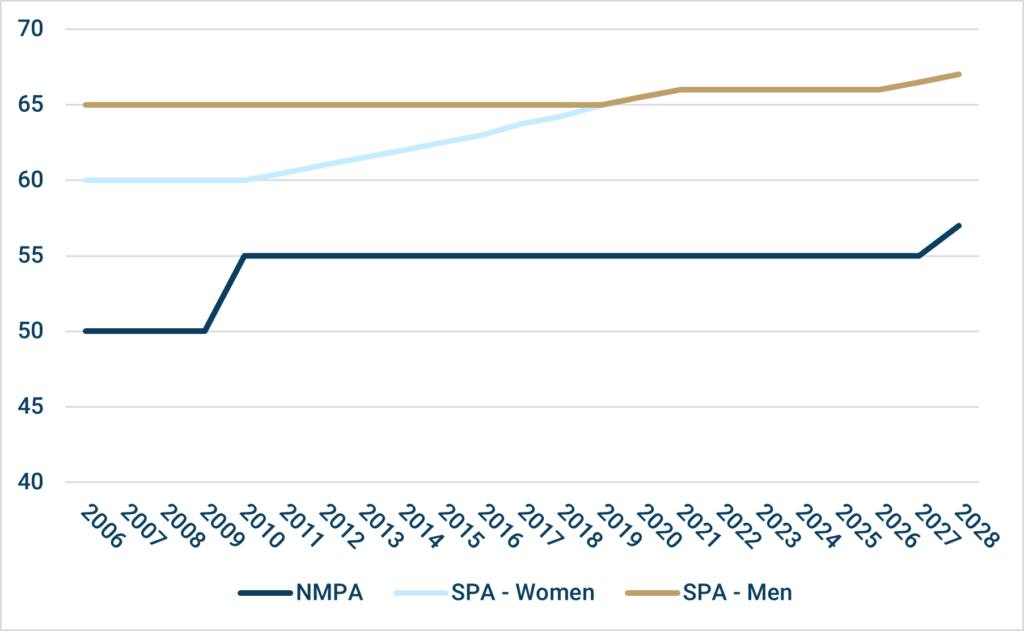 The Government has indicated that there will be exceptions to the higher NMPA covering:

It would appear that if you have a personal pension established by the February cut-off date, you will generally meet the ‘unqualified right’ requirement, giving you a protected pension age of 55. However, some experts believe this could change when the necessary legislation emerges. When the previous NMPA increase was made, there was no such protection for personal pension owners.

If you were born on 6 April 1973, you are potentially the worst hit by the change, unless you have benefits that are subject to a protected pension age. That is because you will reach your 55th birthday on the very day the NMPA increase to 57 takes effect – unlike the changes to SPA, there is no phasing in of the change. If you were born in the preceding two years, you will be in the odd position of being able to draw benefits at age 55 until 5 April 2028, but then need to wait until you reach age 57 before setting up any new drawings from you pension.

The idea of retiring at 57, yet alone 55 may sound appealing, but is it at all realistic? Consider these two factors for a start:

A recent report showed that the average age of those ‘retiring’ in 2021 was 60. However, it also revealed:

The change to a normal minimum pension age of 57 is largely irrelevant – few people can afford to retire so early – but it might affect you if you plan to draw some benefits early, e.g. to clear a mortgage.

Are you sure your planned retirement age is not going to leave you among those two thirds who might run out of money before they pass away? Contact us for an impartial assessment now – the sooner you know where you are, the quicker you can, if necessary, make the necessary adjustments.

The Financial Conduct Authority does not regulate taxation or trust advice. Past performance is not a guide to future performance and may not be repeated. Capital is at risk; investments and the income from them can fall as well as rise.

Articles on this website are offered only for general information and educational purposes. They are not offered as, and do not constitute, financial advice. You should not act or rely on any information contained in this website without first seeking advice from a professional.

Past performance is not a guide to future performance and may not be repeated. Capital is at risk; investments and the income from them can fall as well as rise and investors may not get back the amounts originally invested.

You are now departing from the regulatory site of Finura. Finura is not responsible for the accuracy of the information contained within the linked site.

How much for a comfortable retirement?

The state pension has been underpaid for an estimated 200,000 women, and Britons are being urged to check their entitlement.

House prices are likely to continue rising for some time despite hitting a new record high in May, one of Britain’s biggest mortgage lenders has said.