The US and UK central banks have both hinted at rates rises being nearer than they had previously expected.

On 22nd September 2021, the US central bank, the Federal Reserve (Fed) went first. The Federal Open Market Committee (FOMC) repeated the statement it made after its July meeting that it had ‘…decided to keep the target range for the federal funds rate at 0 to 1/4 percent and expects it will be appropriate to maintain this target range until labour market conditions have reached levels consistent with the Committee’s assessments of maximum employment and inflation has risen to 2 percent and is on track to moderately exceed 2 percent for some time’. However, on this occasion the Fed acknowledged that ‘…the economy has made progress toward these goals. If progress continues broadly as expected, the Committee judges that a moderation in the pace of asset purchases may soon be warranted’.

In layman’s terms, the central bank was accepting that inflation on its preferred metric was well above its 2% target (currently it is at 3.6%). The implication is that if the next set of employment numbers are satisfactory, when they appear on 8th October, the Fed will start to taper its level of quantitative easing (QE) from the current $120bn a month of bond purchases. The bet now is that at the 2-3 November FOMC meeting the Fed will announce that it will start tapering later that month or in December. This may seem a protracted announcement process, but the Fed has bitter experience of surprising the market with changes to QE and now is almost overly communicative.

This was also the month that a new set of dot plots appeared (please see below), showing each Committee member’s assessment of future interest rates at the end of the current year, the next two years and the long term. The plot is as near as the Fed comes to a prediction of rate changes, although the Fed chair, Jay Powell, insists it should be viewed with “a big grain of salt’. The difference between the June and September plots was significant. Whereas in June, five members of the committee were expecting rates to remain unchanged from their current level in 2023, three months later only one person expected no change. Two fewer were expecting no change in 2022, making the committee evenly split on whether rates would come off the floor next year. 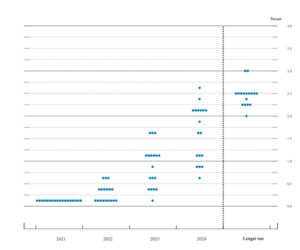 The Bank of England made its announcements the following day on 23rd October. It starts from a different position from the Fed:

The market thinks that the Bank of England is now likely to raise rates by early next year, which would potentially be before it had exhausted the latest round of QE (a point accepted by the MPC). A higher base rate could be a hard sell as there are signs that UK economic growth is slowing (e.g. the 0.1% GDP growth in July). The resultant increase in mortgage costs coming alongside energy price rises and next April’s national insurance (NIC) hikes hardly creates a combination to spur consumer spending, a key driver of growth.

If you would like to discuss the effect interest rates may have on your portfolios, please contact us here.

Articles on this website are offered only for general information and educational purposes. They are not offered as, and do not constitute, financial advice. You should not act or rely on any information contained in this website without first seeking advice from a professional.

Past performance is not a guide to future performance and may not be repeated. Capital is at risk; investments and the income from them can fall as well as rise and investors may not get back the amounts originally invested.

You are now departing from the regulatory site of Finura. Finura is not responsible for the accuracy of the information contained within the linked site.

A handy checklist of suggested planning considerations for individuals for the end of the tax year.

Average UK property prices hit a new record high at the end of 2021, making it the strongest calendar year for price growth since before the Global Financial Crisis (GFC) in 2008.

If getting your finances in order is on your to-do list, here are some tips to help you get started.